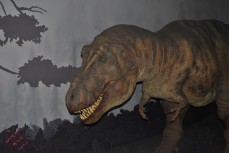 Jamie was scared of dinosaurs. So the day of his field trip, he decided to feign illness. Then he had second thoughts, afraid that Aunt Rachel would discern the truth and he’d have to tell her why. Only mum, who was now in heaven, had known his secret and she had promised never to tell anyone.

He trudged sorrowfully to school and was silent throughout the bus ride. Soon, his whole class would figure it out and he’d be subjected to ridicule.

He sensed impending doom as they filed into the museum. His knees turned to jelly and just when he thought he’d burst into tears, he felt a hand on his shoulder.

His best friend Benny grinned and said, “Want to check out the interactive Science section?”

“B-but, Mrs. Hansworth said we must stay together…,” he began.

“I told her that we’ve already seen the dinosaurs before and the Science exhibit is within her view.”

A wave of relief washed over a grateful Jamie, who suddenly frowned.

“But we’ve not seen the dinosaurs before,” he said, then his eyes widened. Benny knew!

Benny linked his arm through Jamie’s.

“Best friends look out for each other,” he smiled.