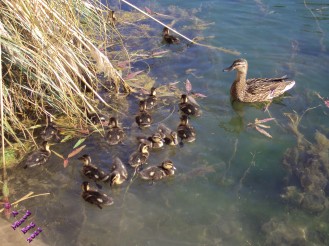 Every afternoon Tommy would race down to the pond in the woods and spend time with his friends, the ducks. H’d tell them stories and warn them about ‘Scary Old Hamilton’ who lived in a cabin nearby. His friends said that one day  he’d eat up all the ducks.

On Sunday Tommy waved goodbye to his feathery playmates, as he was off to visit Grandma for two weeks. He was anxious to get back though, and told Grandma why. She smiled and mentioned the same sentence his teacher had about rumors and their legs.

Back home, he rushed to the pond only to be confronted with the horror of bulldozers. The pond was gone, replaced with mud for the new road.

Walking home in tears, a tall figure suddenly loomed above him. He gasped up at Scary Hamilton, when he saw a little beak poke out from his pocket.

They were safe! Hamilton had heard about the construction and had built a little pond of his own, rescuing all the ducks. Tommy once again had his friends to play with, along with ‘Friendly Old Hamilton’ (his friends still didn’t quite believe him). He’d have a serious talk with them about rumors!